One of the great lures of vintage watch collecting is the story behind the watch itself. Who purchased it originally? How was it used? Where it has been? Most of the time, unfortunately, tracing a vintage watch’s past is next to impossible. It has been sold, resold, given away, thrown out, found, lost, found again, and sold again, over the course of 50+ years.

Sometimes clues can be found from serial numbers and manufacturers archives – though most (if they are still in business today) are either vague, incomplete, or non-existent. So any time there is a bit more of the story available, the allure and collectability of a piece inevitably increases. A box. A receipt. Warranty papers. An original strap. The hangtag. An engraving of a name on the caseback. A piece of the puzzle.

Occasionally watch retailers would print their own name on the dial of watches they sold – how and why this trend started is a bit of a mystery. Presumably it was a combination of marketing and pride, as we usually see it from retailers of high-end timepieces. Universal Geneve was amongst these high-end Swiss manufacturers, and hence often sold in luxury stores across the world alongside Patek Phillipe and Vacheron Constantin, to name a few.

A “double-signed” or “double-signature” dial tells us exactly which store first took delivery of, and sold the watch from new – giving a collector one of the first big pieces of the watch story. As a bonus, it also adds to its rarity and hence exclusivity, and this, I believe, is why collectors find double-signed watch dials so alluring. Retailer double-signatures are quite rare to find on Polerouter dials, and below is a short summary of some which have appeared in collections so far. Though we have seen a number of further retailers signatures on Universal Geneve watches in general, not all of them have been found on Polerouter dials as yet.

Head over to the Reference Gallery to spot some of the rare double-signed Polerouter dials that have surfaced.

“Gobbi” was originally established by Raimondo Gobbi in Modena, Italy. His son Giuseppe moved the workshop to Milan in 1896 in Corso Vittorio Emanuele II, and then again in 1949 to a nearby building where it remains today (above). It is seen in vintage advertising utilising minor variations of the same name, including “Gobbi Gioielli”, and “Gobbi 1842”.

If you look carefully in the image above, you can see Universal Geneve branding at the front of the store.

The luxury goods store was originally established in 1868 as “Spangenberg y Freccero”, by Oscar Spangerberg and Francisco J. Freccero in Ituzaingó y Rincón, Montevideo. Mr Spanderberg sold his share of the business to his business partner Mr Freccero and the name was hence changed to “Freccero Joyeros”. In 1908 it moved premises to Calle 25 de Mayo, Montevideo (above).

Frecceros success led to opening stores in two further locations in Uruguay (Punta Carretas and Punta del Este) where they maintained long-lasting relationships with high-end Swiss watchmakers, such as Patek Phillipe and Universal Geneve. We occasionally see their name double-signed on the dials of watches that they retailed, particularly on vintage Patek Philippe pieces.

The store at their original location was closed in 2015, and the final two stores unfortunately followed suit in early 2019, closing after more than 150 years of continuous operation. Zorilla Subastas handled their closing down auction when the store was closed, in May 2019.

“Chantillí Joyeros” was a luxury jeweller originally located on Calle San Rafael nr 217, in Havana, Cuba. It was a successful business owned by Manuel Hernández and Alicia Abislaimán. Alicia was the daughter of Julio Abislaimán Fade – the owner of “Joyeria Riviera”, another Havana luxury store located nearby on Galiano nr 456.

The Hernández-Abislaimán families migrated from Cuba to Puerto Rico in the early 1960s, where they re-established both companies. According to Puerto Rican government records “Chantillí Joyeros Inc.” was incorporated in Puerto Rico officially in March 1963. Manuel and Alicias son (Nelson) also worked at the store in the late 1960s before leaving to work for Graff Jewellers (London, UK), Harry Winston (NY, USA), Bvlgari (NY, USA), and Van Cleef & Arpels (Florida, USA).

The original “Chantillí Joyeros” store no longer exists, however extensions of the family operate and manage both “Abislaimán Joyas” and “Joyeria Riviera” in Puerto Rico.

“Türler Uhren” is a privately owned retail business that was founded as a watchmaker in 1883 in Bienne, Switzerland, by brothers César Alexander Türler and Jean Henri Türler. They opened a specialist watch and jewellery store in Zürich in 1907, in the Savoy-Hotel on Paradeplatz (above) finding great success in retailing many high-end Swiss watches.

In November 1907 they opened a store in Marktgasse 29, Bern, and further expanded over the decades – at one point operating 60 international outlets. In 2017 Türler moved their Zurich premises from Paradeplatz to Fraumusterstrasse, and currently operate additional stores in Zürich Airport, New York, and Tokyo.

Traditionally their name can be found on vintage pieces from many different Swiss manufacturers, often as a double-signature for Omega and International Watch Co., as well as on their own branded lines. Particularly during the 1950s and 60s, they were known to have also marketed various Swiss brands watches under their Türler name alone – without any mention of the manufacturers name on the dial.

“Tiffany & Co” was founded in New York City in 1837 by Charles Lewis Tiffany and John B. Young as a “stationery and fancy goods store”. The store was originally situated on Broadway, and graduated to silversmithing, high-end jewellery and of course retailing of high-end wristwatches amongst other luxury goods. It is perhaps most well known for its diamond and gemstone artistry, creating the renowned “Tiffany Setting” for diamond rings in 1886.

Today the company operates over 200 stores worldwide, and in 2019 Tiffany’s shareholders agreed to be acquired by LVMH. Their retailer signature is seen on a large variety of vintage Swiss timepieces, including Omega, Rolex, and Patek Philippe.

Due to the long history and popularity of the brand and their double-signatures appearing on high-end vintage timepieces, the “Tiffany & Co” signature is unfortunately one of the most commonly faked retailer signatures to appear on vintage and modern watch dials – in an effort by individuals to fraudulently increase sale prices. By far the most common type of Tiffany signed Polerouter we have seen so far, are the Polerouter Jet models, in steel and 18k gold cases. These microtor movements are often chronometre grade, and the microtor balance marked with the TZY (Tiffany & Co) US import code.

Due to the destruction caused during World War II, they shut down the manufacturing side of the company but continued as a retailer of high end wristwatches. JW Benson retailed Universal Geneve, Longines, Revue, and Cyma/Tavannes, amongst others – of which their dials occasionally bore the company name. In 1973, JW Benson was sold to Garrards, a UK jeweller.

“Joyeria Le Trianon” was one of the most well-known luxury wristwatch and jewellery houses in Cuba – in addition to “Joyeria Riviera” and “Cuervo y Sobrinos”. They were located at 405 Avenue de Italia, Havana (above) inside the elegant Le Trianon building, and specialised in jewellery, fine china, and giftware.

The building fell into disrepair, presumably either as a result of the revolution in the 1950s, or the financial troubles following the collapse of the USSR. As it stands today, the building is essentially a ruin but covered in scaffolding – hopefully indicating that it is under restoration. The “Joyeria Le Trianon” signature has appeared on various other Universal Geneve, Cord, and Cyma watch dials, amongst others.

“La Estrella Del Norte” (Spanish for “The Star of the North”) was established in the early 1870s by the three Levy brothers – Adolphe, Charles, and Raphael – who emigrated from France following the Franco-Prussian War. The store was originally located in Iloilo, and sold items such as religious medals, statues, gold chains, gilt eyeglass frames, and perfume.

The business expanded over the years, opening stores in a number of other locations including Manila, and diversified to sell luxury items such as wristwatches (including Patek Phillipe, Vacheron Constantin, Universal Geneve and Omega), bicycles, phonographs, and even automobiles. Their double-signatures are most often seen on watch dials in the form of either “Estrella del Norte”, or “Estrella de Luxe” text.

Although very little information is available for this store, it was presumably a luxury goods store located at Rue de Bourg 3, Lausanne, Switzerland. Originally owned by Edmond Schwob and Claudine Devincenti-Schwob, it was run by their daughter Catherine Devincenti since 1995, and now resides under the name CdV Consultiung at the same address in Lausanne. The “Au Diademe Lausanne” (a Tiara is a type of Diadem) name has survived on wristwatch dials from various Swiss manufacturers including Marvin, Universal Geneve, and Solvil, as well as on their own “Au Diademe” branded travel clocks, and various pieces of silverware and jewellery from other makers including Gay Freres.

Another lesser-known retailer, Alexandre Duray was a Belgian watchmaker who operated his own shop in Brussels. Situated at 44 rue de la Bourse, it was operated as a watchmaker, goldsmith, and jeweller.

Alexandre Duray was granted the title of “Fournisseur breveté de la Cour de Belgique” – official supplier to the royal Belgian court, by HRH the Countess of Flanders. This gave the right to display the Belgian royal coat of arms on their products.

The Duray name survives on objects which date back to around the turn of the 20th century, on pocket watches and ladies jewellery, luxury silver, and an unusually high number of Universal Geneve pieces – including various Polerouter, Compax and Tri-Compax models.

The signatures of few other mystery retailers have been seen on Polerouters, such as “Joyeria Milos” and “Hamiltons”. Further, there are many more retailers which have appeared as double-signatures on Universal Geneve models other than Polerouters.

If you know more interesting details about these retailers, have a new double-signed Polerouter to add to the Reference Gallery, or one with a retailer signature not yet shown here, please get in touch with us using the contact form. 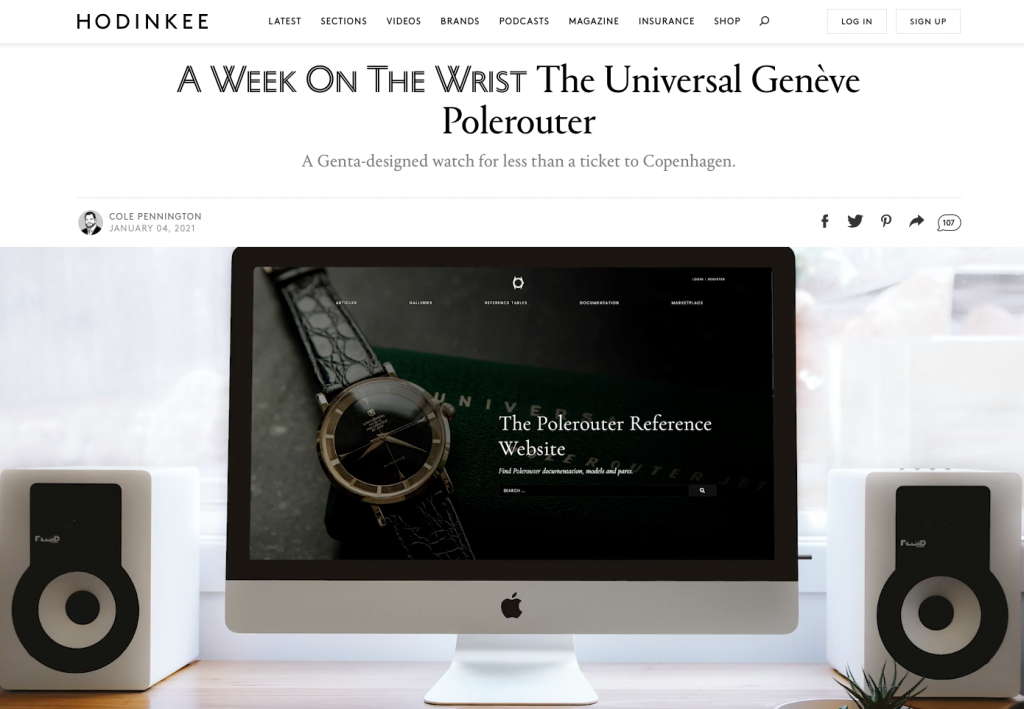 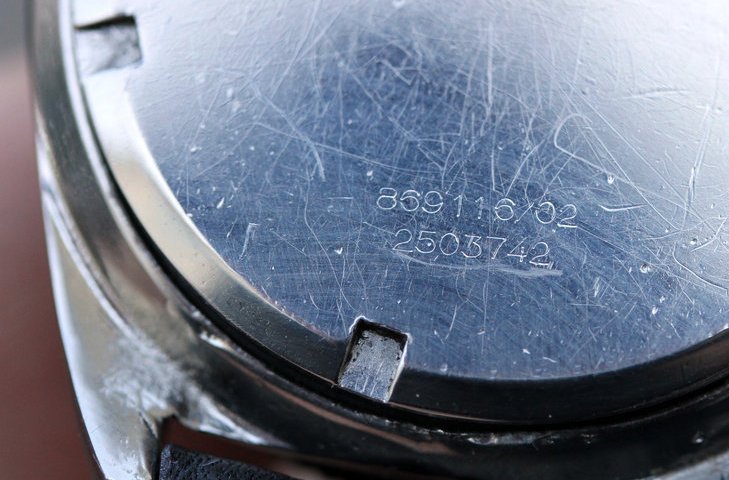